Work has continued on Talbot Road in adding more of the Wand Orcas. On the inbound side, Wand Orcas have been added before and after the Great Stone Road junction.

On the approach to Great Stone Road the Wand Orcas stop a fair distance from the junction. This is due to space restrictions at the junction, meaning the mandatory cycle lane gives way to a narrow advisory lane.

To solve this, the junction needs realignment to free up additional space for a wider cycle lane. This is bigger than the scope of the Stretford Cycleway, so it hasn’t happened. Hopefully, this will be rectified as some point in the future.

The installation of Wand Orcas beyond Great Stone Road, though there’s a large gap for the bus stop. As I’ve said before, these will no doubt attract waiting car, forcing bikes around them and into traffic. We really need bus stop bypasses along Talbot Road to solve this.

Carrying on further, it appears some work is being carried out to address issues in the surface, while wand Orcas are being installed. I’m guessing this might be due to issues in being found in the resurfacing.

The Wand Orcas continue as close as they can to the White City Way junction. Unfortunately though, it’s not far enough. While I was riding along, a left-turning car pulled across the cycle lane without looking.

There’s no change to the inbound section of Talbot Road beyond White City Way, due to the space limitations. Though this is due to see improvement as the first of the Trafford Beelines schemes.

The key issue here is the amount of right-turning vehicles onto Seymour Grove. This backs up to before White City Way and means the vehicles carrying on ahead onto Chester Road are blocked. Many drivers choose to drive into the Mandatory cycle lane to bypass the queue.

Progress on the outbound side isn’t as advanced as the inbound side. Though Wand Orcas have started going in on the approach to White City Way and are working quite well.

The Wand Orcas continue beyond White City Way and are doing a good job of protecting the cycleway. I saw some overtaking at this point, which was possible while remaining in the cycleway.

Work further down Talbot Road isn’t as advanced. Though as you approach Chester Road, there’s a large section that’s been resurfaced. On the whole, this has been done to a much higher standard than the rest.

I’ve not seen it myself, but I’ve been informed that the problems with standing water on Talbot Road hasn’t been resolved as part of the resurfacing work that’s been carried out there. This is really disappointing, as the surface water is a real issue when it rains. Again, this is something I’ve raised previously. It really should have been sorted out.

This is one of the lower quality bus stop bypasses, which is just a lane painted around the back of the bus stop. The green paint does help to highlight the cycleway, which helps. Though I’d prefer to have seen sloping kerbs here and a different level for the cycleway.

I’m also not sure why the angles have to be so sharp here. There’s plenty of space here, so they could have gone for much more forgiving angles.

Carrying on, there’s more green paint across the side junctions, to highlight the presence of the cycleway to vehicles turning onto Stretford Road.

Further on, it’s good to see people have got the hang of the new parking bays, meaning the completed sections were free of cars. This is good news, though I still have concerns about the sections without Wand Orcas.

There’s a section before then next bus stop bypass that’s waiting for realignment of the parking bays. I’m not sure why this hasn’t been started, though I’m guessing it might be something to do with space issues and work on the outbound side.

Here, you get an appreciation of what a difference the new cycleway makes. Gone are those awful narrow door-zone cycle lanes.

Carrying on further, there’s more paint going down and Wand Orcas going in. This seems to be progressing well. Again, I think some of the angles could have been more forgiving here.

The work on the outbound side is further behind, with resurfacing work being carried out as well as realignment of the bus stops. So there’s not much to see right now. 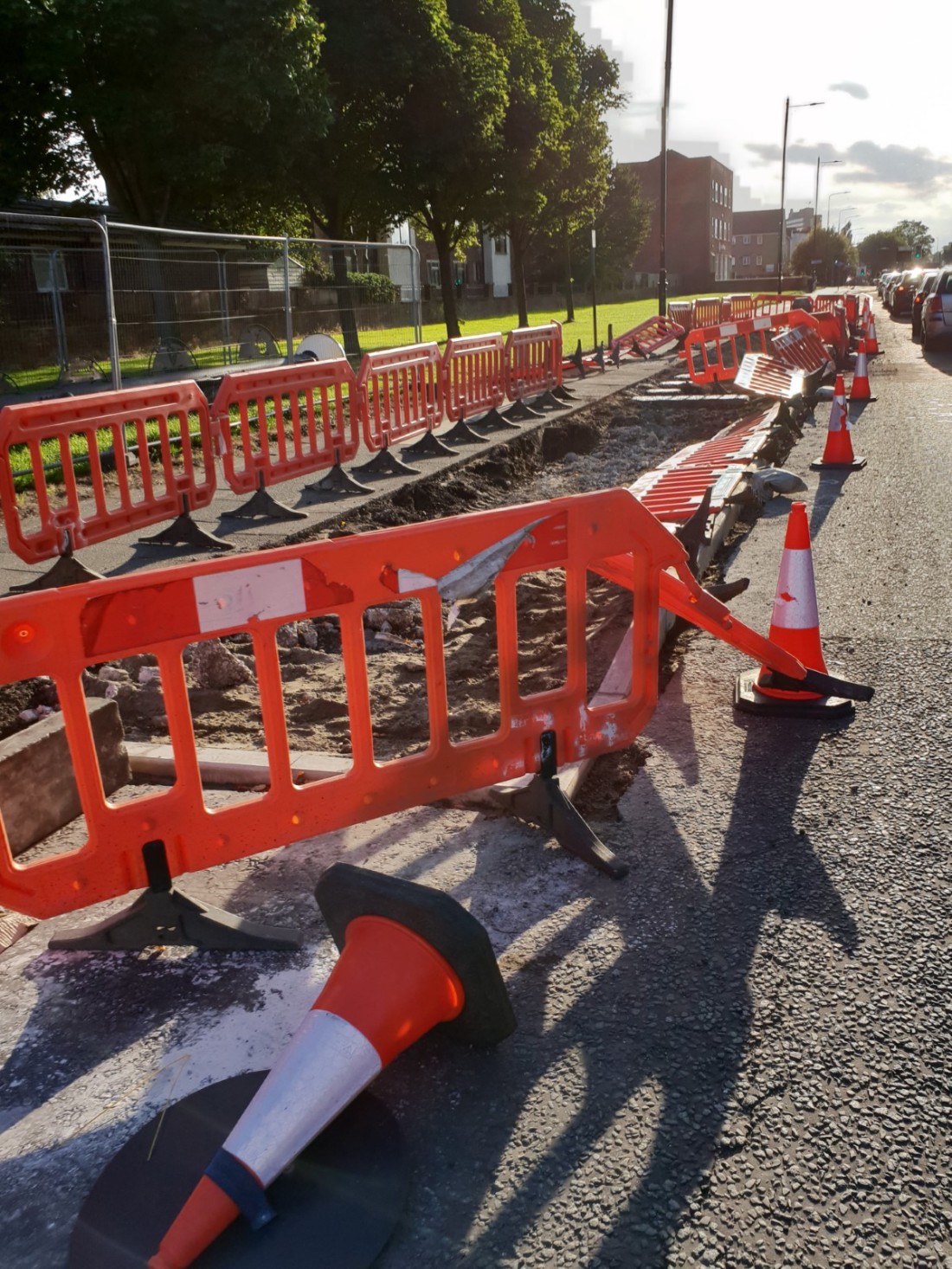 While it was hoped that the installation of the Wand Orcas would see the end of motor vehicles parking the cycleway, it’s not taken long for us to see the first instance of someone doing so. In this case, a Bargain Booze lorry delivering to the Select Convenience shop on Stretford Road, parking on top of the Wand Orcas.

I was fully expecting this to happen, but I thought we might at least get the cycleway complete before happened. In this instance, it appears the Wand Orca is still in place, though I don’t know if it’s been damaged. Though irrespective of the potential damage, it meant the cycleway was blocked while the lorry was unloaded.

This had done little to allay my concerns that sections of the cycleway near the shops will end up being regularly blocked by motor vehicles, whether it’s loading or people just popping in the shop. Either way, it amounts to the same thing, a blocked cycleway.

That’s it for now. Come back again soon for a further update. 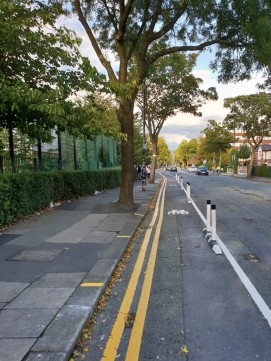 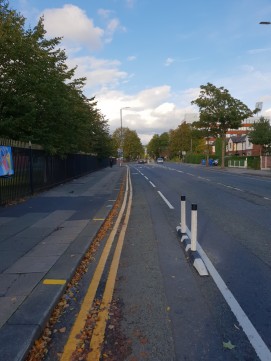 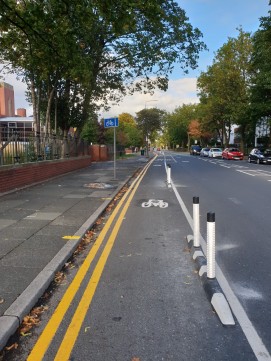 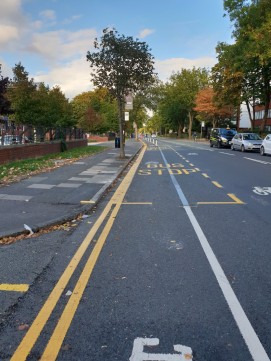 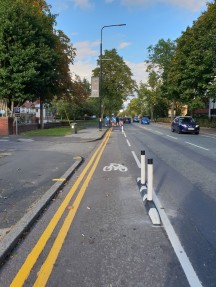 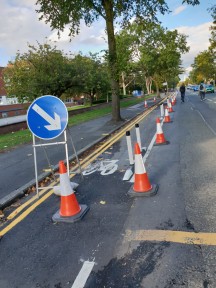 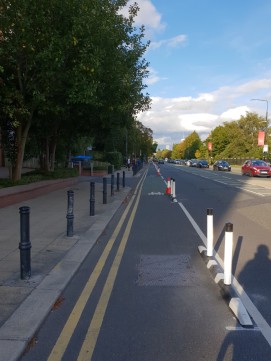 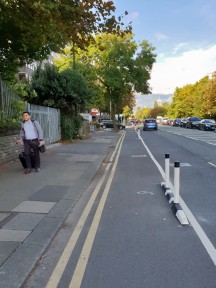 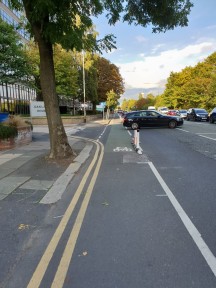 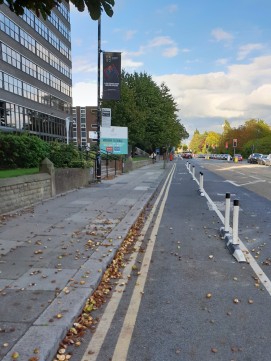 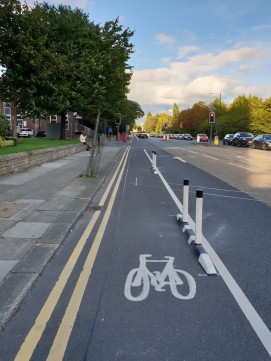 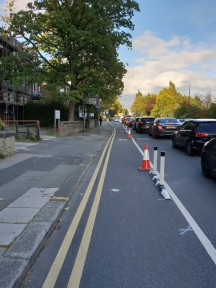 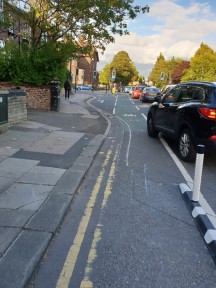 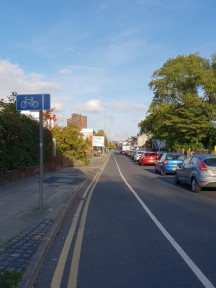 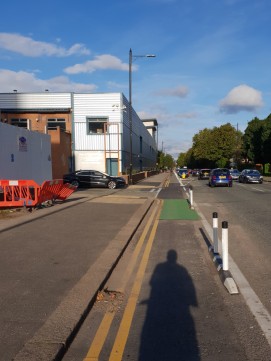 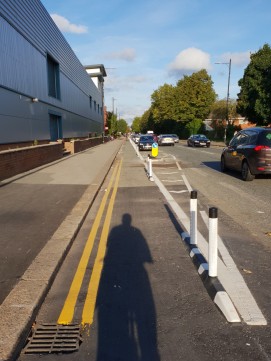 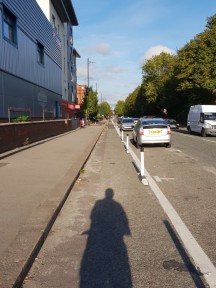 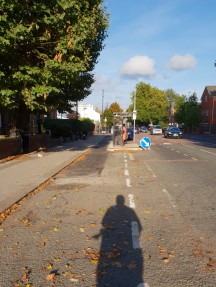 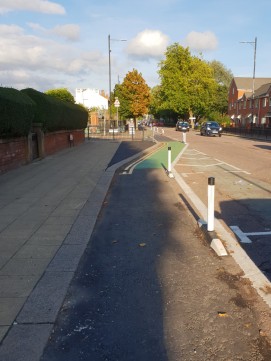 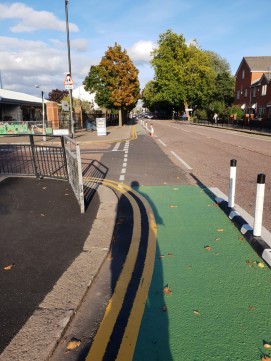 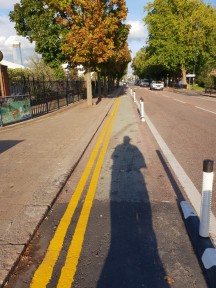 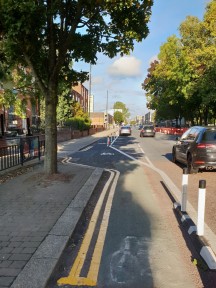 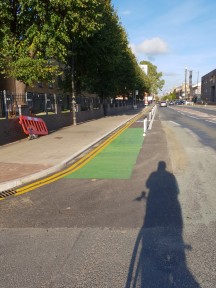 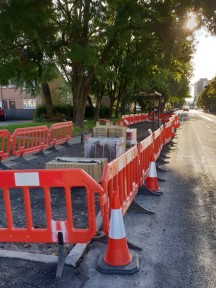 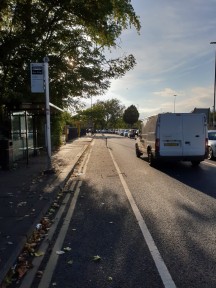 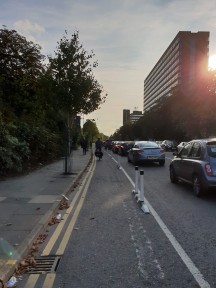 5 thoughts on “Progress on the Stretford Cycleway – Mid September 2018”